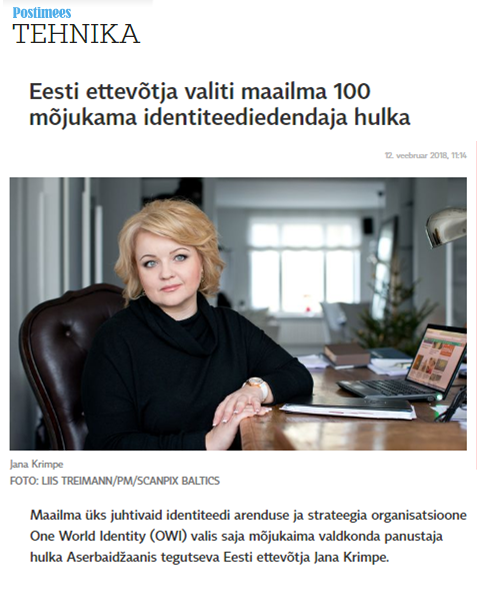 In February 2018 Mrs. Jana Krimpe, the founder and the head of B.EST Solutions and co-chair of the Global Alliance for National Mobile Identities (GANMI) was included in the top 100 Influencers in Identity according to One World Identity (OWI). Her success has also been noted by a series of the foreign mass media. In particular, the credible Estonian publication Postimees pays tribute to Jana Krimpe for exporting the prototype of Estonian X-Road platform, which is also used in Finland, Japan and other countries, in Azerbaijan e-government system, developing Asan İmza Mobile ID, as well as implementing a number of other revolutionary technologies. The article also highlights her contribution to establishing close IT collaboration between Azerbaijan and Estonia.

It should be mentioned that One World Identity (OWI) is the leading independent identity research and strategy companies. Operating in the United States of America, this organization deals with cybersecurity, e-commerce and risk management, and is aimed to support the development of sustainable, forward-looking innovative identities and strategies.

This year over 1000 nominees were striving to be listed in the top 100 world influencers along with such well-known people as Mark Zuckerberg, the CEO of Facebook Inc., Ron Wyden, a U.S. Senator, and Andrea Servida, the Head of Unit “eGovernment and Trust” of the European Commission.

Mrs. Krimpe was one of the originators of national digital solutions in Azerbaijan. Along with the X-Road platform managed by the Ministry of Transport, Communications and High Technologies for e-government and creation of Asan İmza Mobile ID, which is currently used as an electronic identity for providing more than 600 e-services by both Public and private sectors the Asan Certification Services Centre (ASXM) under the Ministry of Taxes which meets all world standards of trusted service provider was established. Besides, the unique 195 call centre, whose Asan İmza integrated operations allow all strata of society regardless their computer or financial literacy or internet availability to get an access to these services.

B.EST Solutions, headed by Jana Krimpe is also a partner in carrying out the single digital signature for Islamic Educational, Scientific and Cultural Organization (ISESCO). The Digital Trade Hub of Azerbaijan founded by the Center for Analysis of Economic Reforms and Communications of Azerbaijan and B.EST Solutions enabled transforming all national exporting and importing procedures into electronic environment. Moreover, following the example of the Estonian e-Residency, the m-Residency project is being launched in Azerbaijan, that significantly facilitates foreign companies to make business and contributes to attracting investments to the country.

It should also be mentioned that projects carried out by B.EST Solutions have been nominated for the prestigious UN WSIS-2018 awards. Mrs. Jana Krimpe was awarded as «the true ambassador to Azerbaijan» and listed in the “2016 New Europe 100” according to the Financial Times and Google.